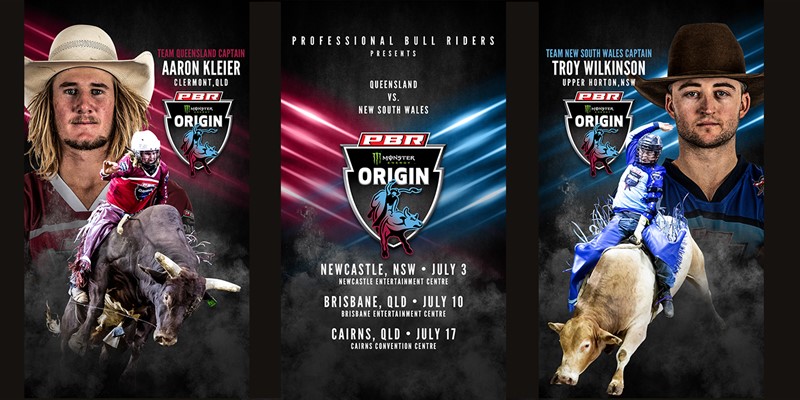 “I am looking forward to riding as a team with the Queensland boys; however with bull riding being such an individual sport, it’s good to get the chance to ride together as a team,” Team Queensland Captain Kleier said. “It just has an exciting and different feel to any other event, and I can’t wait to ride with all the Queensland boys.”

“It is a great privilege to be named Captain of NSW: it is where I am from, it is who I am, we are a tough and resilient state in all aspects,” Team New South Wales Captain Wilkinson said. “We will be a force to be reckoned with, no doubt about it.”

Kleier was an integral member of the victorious Team Queensland for the inaugural PBR Origin event in 2019. Including his 86-point ride on Rock The House (Dunne Bulls/BSA) in the championship round, the Clermont-native added 167.5 points to the Maroons’ winning total.

The 23-year-old will captain Team Queensland after making history in 2020, becoming the first rider in history to win the PBR Australia Championship in three consecutive seasons.

Locked in a feverish, season-long battle alongside Lachlan Richardson (Gresford, New South Wales) for the title, Kleier’s march to the coveted buckle included four event wins on the nation’s elite Monster Energy Tour. His 2020 campaign was also highlighted by eight additional Top-5 efforts, including a third-place result at the 2020 PBR Australia Grand Finals

In 2020, Wilkinson competed at just five events before a dislocated shoulder required surgical repair, sidelining him for the remainder of the season. During the few months he was active, Wilkinson not only represented Team Australia at the 2020 PBR Global Cup USA, but also won the Australian Touring Pro Division event in Marrabel.

Stay tuned to PBRAustralia.com.au for information on when tickets will be available for PBR Origin III – Cairns at the Cairns Convention Centre when the 2021 PBR Origins Champion will be crowned.

The bull riding action for each stop of the 2021 PBR Origins event will begin at 7:30 p.m. AEST. Each stop will feature three rounds of competition. After each of the 10 competing bull riders for both teams attempt one bull each in Round 1 and Round 2, the Top 4 riders from each team will advance to the bonus round for one final out. The event winner will be the team with the highest combined score in the event aggregate.