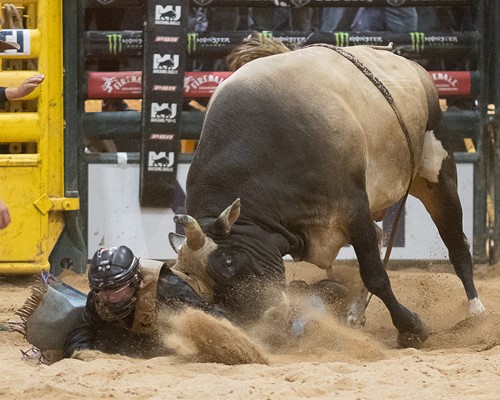 More PBR Australia Touring Pro Division action comes our way this afternoon, with fourteen cowboys going head-to-head against a promising set of bulls in the Shoalhaven.

Here are some of my favourite matchups:

Cody Heffernan on 1073 Mac Daddy (Diamond S Bucking Bulls)
Mac Daddy bull has been bucked at both PBR Origin events this season, and he has emerged with a 1-and-1 record. This bull was ridden in his debut trip by Kelsey Pavlou for 79.5-points, but he produced a much better trip in his out at Tamworth to buck off Caiden Sandilands in 4.4-seconds. He tends to dive in each direction leaving the chute, and favours a spin to the left to complete his trip. That will put him away from the Heffernan's hand, but the Singleton cowboy is in red hot form, and he will be hard to get on the ground.

Will Purcell on 681 Yella Belly (TnR Bucking Bulls)
Since returning from injury, Purcell has looked strong against a tough run of bulls, going 1-for-3 with an 86-point ride and some long buck-off times. Here he goes up against Yella Belly, who has been out twice in PBR Australia competition and has turned back sharply to the right on both occasions. We are yet to see a cowboy officially make it past the 3-second mark, but Oscar Leake did ride him for a few more seconds after getting called for a slap at Mildura, and the bull looked to settle into his work nicely. I think this looks like a great matchup for the Merrijig talent.

Qynn Andersen on 792 Say When (TnR Bucking Bulls)
Say When made his PBR Australia debut at PBR Origin I in Newcastle during March, and he was almost ridden by Lachlan Richardson, who hit the dirt at 7.8 seconds. He took a big look to the right before turning back to the left and entering a flat spin. The Koumala young gun has been hard to get on the ground over the last two months of competition, recording four top-3 finishes from his last six event starts. This matchup could go either way, but I think Andersen can get the job done and post a score.

Braith Nock on 648 Bluey (TnR Bucking Bulls)
The Bendemeer rookie put together a lovely performance at Toowoomba to finish runner-up to Aaron Kleier, but he has been shut out at the last two tour stops. This matchup looks like a nice opportunity to get his name back on the leaderboard. Bluey has been ridden for scores of 83 and 83.5 points in his two career trips. Both scores have gone the way of right-handers, with the bull turning back in a clockwise direction on both occasions. Nock will be the first leftie to draw this bull, and he will have to get this bull covered riding away from his hand.

Brumby Brandenburg on 264 Call Me Joe (TnR Bucking Bulls)
This is a rematch from Scone earlier this season, where Call Me Joe came away with the win over the Bloomsbury bull rider in 3.36 seconds. This veteran bull continues to churn out honest trips around to the right, and he has combined with Cody Heffernan and Lachlan Richardson for scores in his last two outs. The previous left-hander to cover him in PBR Australia competition was Aaron Kleier for 88-points at the first event of the 2021 season in Rockhampton. Brandenburg is in career-best form, and he will be fired up for his opportunity to even the score.

Lachlan Richardson on 71 Velvety Elvis (TnR Bucking Bulls)
Richardson had ridden six straight bulls in PBR competition before running into a tough one in the Championship Round at the Bull Pit last weekend. He will be looking to regain that momentum with the PBR Origin decider rapidly approaching. Velvety Elvis made his debut at Origin II in Tamworth, dumping Chris Wilson with an impressive 43-point bull score. He bucked very strong and spun to the right during that 4-second performance, and I can see him combining with the Gresford cowboy for some big numbers in this matchup.