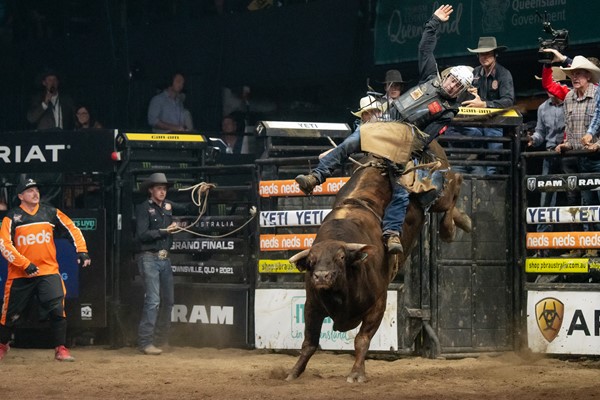 The Monster Energy Tour's Scone Invitational will get underway on Saturday, February 5 at 7:00 p.m. AEDT.

BUCKING BACK TO NSW – This weekend, for the first time since 2014, PBR Australia will travel to Scone, New South Wales, holding the elite Monster Energy Tour’s PBR Scone Invitational at White Park Equine Arena. The event will mark the second tour stop of the season, and first time PBR has held an event in New South Wales since November 2019 when the Tamworth Iron Cowboy was held in Tamworth, New South Wales. Action for the 2022 PBR Scone Invitational will begin at 7:00 p.m. AEDT on Saturday, February 5.

THIS WEEKEND’S FORMAT – The PBR Australia Monster Energy Tour’s Scone Invitational at White Park Equine Arena will feature two rounds of bull riding. After all competing bull riders attempt one bull each in Round 1 and Round 2, the event champion will be determined by the rider with the highest total score from their two draws. One rider will have the opportunity to earn a maximum 80 national points, with 50 to be awarded to the event victor, and 15 to each round winner.

BURTENSHAW. IS. BACK. –  For the first time since November 2019, this weekend in Scone, New South Wales, Australian sensation Nathan Burtenshaw will compete on home soil. On the spurs of his event win in Melbourne, Victoria in his last appearance in his home nation, Burtenshaw travelled to the United States to begin the 2020 season. After competing at just five events, including representing Team Australia at the 2020 PBR Global Cup USA, Burtenshaw’s season came to an abrupt halt as the COVID-19 (coronavirus) pandemic brought the world to a shutter. The stoic New South Wales native, whose career has been embroiled with injury, didn’t return to PBR competition until August 2021, riding at three events across all levels of competition. He last competed in September 2021, riding at the Touring Pro Division stop in Lewisville, Texas. Going 1-for-2, riding Wyloh for 86 points in his most recent out, Burtenshaw finished second. As he prepares to return to Australian competition this weekend, Burtenshaw will face off against Kick Start My Heart in Round 1 and Posting Bail in Round 2.

FIELDER READIES FOR TITLE PUSH – For Brady Fielder, this weekend in Scone, the door is wide open for him to overtake the No. 1 ranking in the race for the 2022 PBR Australia Championship. After Kurt Shephard won the season-launch event in Rockhampton, he sustained a broken neck at a rodeo in late January, sidelining him for three months. Just 22 points behind Shephard in the standings, Fielder is poised to leave Scone as the top man in the nation. When the season got underway on New Years Eve in Rockhampton, Fielder delivered a runner-up effort. In Round 1, the 22-year-old registered the top score of the season-launch event when he bested Rifleman for 86 points. Fielder then faced a rubber match in Round 2, slated to square off against Ariat’s Ol’ Son for the third time in his career. The two athletes first went head-to-head in November 2020 during the championship round of the Monster Energy Tour event in Airlie Beach. Despite a valiant effort by Fielder, Ariat’s Ol’ Son emerged the dominant athlete, sending him to the ground in 4.31 seconds. In 2021, however, their rivalry was renewed at the Great Western Hotel in Rockhampton in early October. Fielder avenged his buckoff from the previous season, reaching the requisite 8 for 86 points. Unable to replicate his recent success, Ariat’s Ol’ Son took the lead in the rivalry, besting Fielder in 4.05 seconds. Eager to rebound from the buckoff, and continue his quest for his first national title, Fielder will first attempt Shotgun Willy in Round 1 of the PBR Scone Invitational, followed by Chaos in Round 2.

FAMILY AFFAIR FOR THE RICHARDSONS – It is without question that the Richardson family has deep roots in the Western sports world. And that will be on full display this weekend with the family present in multiple facets at the PBR Scone Invitational. Not only will seven-time PBR World Finals qualifier Lachlan Richardson compete at the tour stop, chasing his first PBR Australia Championship, but younger brother Eric will enter the arena as one of the tour stop’s protection athletes. For Lachlan, the event will mark his 2022 season debut, and he has drawn Up in Lights in Round 1, and Told Ya So in Round 2.

FAMILIAR WATERS – This weekend, Round 1 of the PBR Scone Invitational will feature just one rematch, as the rivalry between Jake Curr and Chocolate Thunder will be renewed. The two athletes first went head-to-head in 2020 as Chocolate Thunder got the better of Curr in 2.79 seconds in Melbourne, Victoria.

PAST SCONE EVENT WINNERS – PBR has twice traveled to Scone, making tripes to the New South Wales city in both 2013 and 2014. Both editions of the event were won by Chris Lowe. Going a perfect 2-for-2 at both iterations of the tour stop, Lowe punctuated his win in 2014 with a 90-point ride in the final round.

NEXT UP – The 2022 PBR Australia season will continue on Saturday, February 12 in Rockhampton, Queensland, at the Great Western Hotel. Action for the Monster Energy Tour’s Rockhampon Invitational will get underway at 7:00 p.m. AEDT.