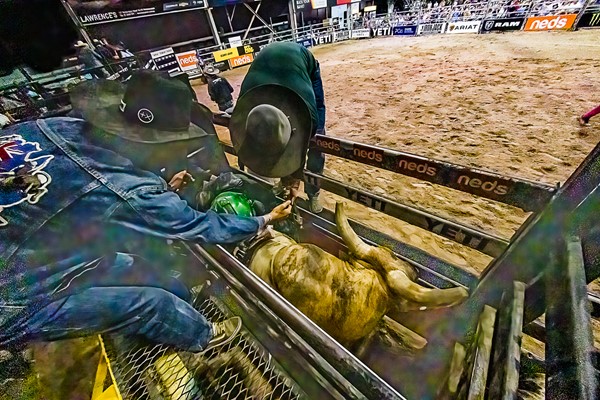 With No. 1 ranked Aaron Kleier absent from the draw this weekend with a shoulder injury, the top-ranked riders of the Monster Energy Tour have been gifted an opportunity that they can’t refuse as we enter the final month of the 2021 PBR Australia season.

View the daysheet for the 2021 Emerald Invitational.

Lachlan Richardson on Rocky Top (CF7 Bucking Bulls)
The No. 6 ranked Richardson should be able to get his night off to a good start here against Rocky Top. This bull has a 2-1 PBR record, with the single 83.5-point score going to Dan Ruhland at the NQ Elite Touring Pro. In his first two trips, this bull was around to the right and possessed rider-friendly tempo, but last time out in Rockhampton, he turned back to the left. The Gresford cowboy should start a short-priced favourite in this matchup no matter which direction the bull decides turns back.

Sam Woodall on Milky Way Man (Diamond J Rodeo Co.)
Woodall has been riding well since his return from injury, going 2-from-5 with the three buck offs all coming deep into the clock. Here he faces Milky Way Man who has split his four appearances in the PBR with the cowboys, allowing two qualified rides worth 82-points each. Those scores went to Kurt Shephard and Aaron Kleier at Cairns and Rockhampton respectively. In all his trips he has left the chutes and looked to the left before turning back to the right. That puts him into the hand of the Heywood bull rider, and he should be able to comfortably take him to the whistle.

Mitchel Paton on Scooby Doo (Kleier Bucking Bulls)
Paton is one of the riders fighting for a spot at the PBR Australia Grand Finals, and he sits just inside the cut line heading into the final month of the season. The Nebo veteran has bucked off his last six bulls, but he gets an excellent chance to get his name back on the leaderboard here. In his nine PBR performances, Scooby Doo has been covered just once, and that was earlier this season in Rockhampton for 82-points by Brady Fielder. This bull starts off spinning to the right and reverses his spin to the left mid-ride, and that is when most of his buck offs occur. If Paton can take advantage of the bull beginning the trip into his hand, he has a good chance at reaching the whistle after the reverse.

Lane Mellers on Makin 8 Bucksnort (Wallace Bucking Bulls)
After seven weeks on the sidelines, nobody will be looking forward to this matchup more than Mellers himself. Before he was injured rodeoing in Brisbane, the Mundubbera bull rider had ridden five of his last eight bulls to establish himself in the top-10 on the season leaderboard. He resumes here ranked No. 9 and gets a re-match with Makin 8 Bucksnort. When they met up last season at Toowoomba, the bull won in 4.62 seconds. This bull has been ridden in his previous three trips for an average of 83.67 points, and although he is a much better fit for left-handers, Mellers’ should take him a long way riding away from his hand.

Kurt Shephard on Reloaded (Dittmann Bucking Bulls)
This is the first of two re-match opportunities for Shephard tonight. He met up with Reloaded back in June at Rockhampton, where they combined for a round winning score of 85.5 points. The Atherton bull rider has been hard to hold out of late, climbing to No. 2 in the national standings off the back of a 6-for-9 riding effort across the past four events. The bull likes to turn back to the right, so it is not surprising that right-handers hold the bulk of the qualified rides. Shephard is the only leftie to ride time, and with the opportunity to eat into Kleier’s national standings lead on the table, I think he will be hard to hold out.

Qynn Andersen on Code Blue (Kleier Bucking Bulls)
Code Blue has faced seven right-handed riders in his PBR career, and three of those cowboys have come away with a score. The Koumala young-gun gets his chance to add his name to that list tonight, with the bull again expected to turn back to the right and into the rider's hand. Andersen is still finding his feet at this level, but his confidence will be growing after he posted a solid qualified ride at the last tour stop in Mackay aboard this bull's pen mate Chilli Hit. It looks like a flip of the coin on paper, but my cash will be on the cowboy to reach the bell and further push his claims for his maiden Grand Finals berth.

Troy Wilkinson on Freckles Brown (Wallace Bucking Bulls)
This matchup features two of the veterans of the tour, and it will be the first time that they have drawn each other since Last Cowboy Standing in Brisbane way back in 2017. On that occasion, Freckles Brown got the better of Wilkinson, winning in 5.21 seconds and posting a bull score of 42.75 points. The Upper Horton veteran has gone 2-for-5 across his last two tour starts, and his last three draws have turned back away from his hand. Freckles Brown usually prefers an anti-clockwise spin which will suit Wilkinson, but he has mixed it up in the past with the odd turn to the right. This should be a fun matchup, and I think Wilkinson can become just the eighth PBR rider to receive a score aboard this bull.

Lachlan Richardson on King Kong (Kleier Bucking Bulls)
This will be the third time Richardson and King Kong have fought it out inside the PBR Australia arena. On both occasions, the matchup resulted in a round winning score with 87.75 points awarded at the Iron Cowboy event in Townsville back in 2017 and 88.5 points inside the same arena at the 2019 Grand Finals. The bull will turn back into his riding hand, so it will again be another great matchup. If Richardson does his job in Round 1, a qualified ride here will put him in a solid position to collect another event win.

Macaulie Leather on Super Natural (CF7 Bucking Bulls)
Leather hasn’t had the greatest month or two on tour, covering just one bull across his last three events. Tonight, he looks to have an excellent opportunity to get the train back on the track. Early in his career, Super Natural was very rider friendly, allowing eight qualified rides from his first fifteen trips. Since then, he has fought back strong and has bucked off six of his last seven riders. He prefers a right-handed spin, which puts him way from Leather’s hand, but I think there is a twist to this matchup. If these two haven’t matched up outside of PBR competition, I would be very surprised. At very least Leather would have watched this bull buck a bunch of times as Super Natural was a regular at the rodeo series where Leather cut his teeth on his way up to the PBR. So, with that familiarity, an eight-second bull ride would not surprise me.

Kurt Shephard on Flyin Hippie (Wallace Bucking Bulls)
Shephard and Flyin Hippie matched up at the tour stop in Mackay just a few weeks ago, and it was the bull that came out on top on that occasion. The buck off came at 3.78 seconds, with the bull producing an intense trip around to the left for 43-points. Only two riders have been successful on Flying Hippie in sixteen trips. Those scores went to Aaron Kleier for 89-points in the bull’s debut in 2020 and Lachlan Richardson for 87.5 points at Burnett Heads a couple of months back. Expect the bull to produce this regular trip - around to the left, jumping high in the air with plenty of drop. It's up to Shephard to hang on in the opening stages of the ride, but things will get easier as the ride progresses.