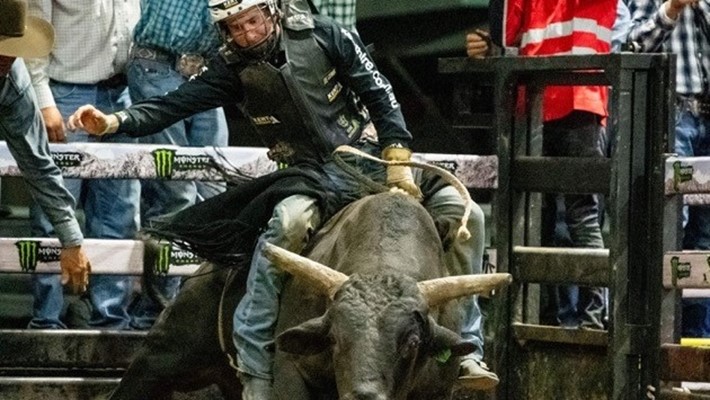 The third PBR Australia event of 2021 will be held in Alice River, Queensland, on May 29.

SUPPORTING THE NEXT GEN – This weekend, for the first time in history, PBR Australia will partner with North Queensland Elite Rodeo to host one of the league’s Back to the Heartland Series events in tandem with the association’s prestigious North Queensland Elite Junior Rodeo. Held on Saturday, May 29, PBR action will begin at 7:00 p.m. AEST following the four-discipline junior rodeo. The new partnership is reflective of the Back to the Heartland Series’ commitment to not only return to the locations where bull riding first started, but support those who helped the PBR in its formative years and the next generation of bull riding talent.

THIS WEEKEND’S FORMAT – The PBR Australia event held in tandem with the North Queensland Elite Junior Rodeo will feature two rounds of bull riding. After each of the 20 competing riders attempt one bull each in Round 1, the six bull riders with the top ride scores will then advance to the championship round where they will attempt one final bull in an effort to be crowned the event champion..

LEATHER LIGHTS IT UP IN ROCKY – When the 2021 season got underway in early May in Rockhampton, Queensland, the PBR universe was introduced to rookie sensation Macaulie Leather. In his career-first PBR event, the Calliope-native finished fourth, surging to No. 4 in the early national standings. Going 1-for-2, Leather’s Top-5 finish was headlined by his 86-point effort aboard Iron Jacket in Round 1, which also marked his first-ever trip at a PBR event. As the season continued the very next day at Great Western Hotel, Leather began the event 48 points behind then No. 1 Aaron Kleier. In an effort that won’t soon to be forgotten, Leather dominated Round 1, topping the leaderboard with an 88.5-point score on Dance Monkey, to catapult himself to the event victory. Earning a crucial 65 national points, Leather catapulted to the top of the national standings, now 17 points ahead of No. 2 Kleier. Going 1-for-2 at both iterations of the PBR Rockhampton Invitational, only one bovine athlete was able to get the better of Leather – Cattle Kings Boogers Beach. After the Dittmann Bucking Bulls’ bovine athlete bested Leather in 6 seconds in the opening event, marked 45 points, Boogers Beach once again bucked off Leather in the second event’s championship round, this time dispatching him in a quicker 2.49 seconds to earn a 45.5-point score. Both trips earned Boogers Beach the High-Marked Bull of the Event honor.

Leather will attempt to further his stronghold on the No. 1 rank in the national standings when he attempts Chasing Dragons in Round 1 of the PBR event held in tandem with the North Queensland Elite Junior Rodeo.

KLEIER AMID HISTORIC PURSUIT – In 2021, Aaron Kleier is attempting to accomplish a feat that has never been done – win the PBR Australia Championship in four consecutive seasons. Additionally, should he win his fourth title in 2021, Kleier would also tie David Kennedy for most Australian Championships won by one rider in league history. A four-time Australian Champion, Kennedy won his titles in 2009-2010, 2012 and 2014.

The Clermont-native took an initial step forward towards actualizing this dream, winning the season-launch event in Rockhampton in early May. As one of two riders to go a perfect 2-for-2, Kleier’s victory was headlined by his first-ever 90-point ride in the PBR, winning Round 1 of the PBR Rockhampton Invitational when he covered Black Tuxedo for 90.5 points.  The qualified ride, which brough the Queensland crowd to its feet, was Kleier’s first aboard the powerful bovine athlete after his two prior attempts ended in a buckoff. With the top position on the event leaderboard, Kleier drew his second familiar opponent of the event -- Call Me Joe – for his championship round showdown. Having first matched up against the bull in December 2018, Kleier covered Call Me Joe for 82 points that year en route to his victory in Adelaide. In a repeat of history, Kleier once again made the 8 aboard the bull to clinch an event win, this time marked 88 points to cement his victory. Earning 77 national points, Kleier briefly surged to the No. 1 position in the national standings, leading then No. 2 Lachlan Richardson by 16 points. With the season continuing the very next day, Kleier surrendered the No. 1 ranking to Macaulie Leather after being shutout, going 0-for-2. Ahead of this weekend’s event held in tandem with the North Queensland Elite Junior Rodeo, Kleier trails No. 1 Leather by a slim 17 points. He’ll attempt Meet Ya Maker in Round 1 of the event at Hervey Range Rodeo Grounds.

RICHARDSON RETURNS RED HOT – Seven-time PBR World Finals qualifier Lachlan Richardson had his 2020 season conclude in heart-breaking fashion. Sustaining a hematoma on his back during the first day of competition for the PBR Australia Grand Finals, Richardson was unable to continue his pursuit of his first national title, relegated to the sidelines for the final day of the season. As a result, after being locked in a heated battle with Aaron Kleier throughout the season, Richardson concluded the year No. 2 in the national standings, 58 points behind champion Kleier. Returning in full health for the season-launch event in early May in Rockhampton, not only was Richardson back to his title-contending form, but the battle between Kleier and himself was quickly reignited.

At the first iteration of the PBR Rockhampton Invitational, Richardson went a perfect 2-for-2 to finish second to Kleier by four points in the aggregate. First riding Slink E Malinki for 85 points in Round 1, Richardson punctuated the tour stop with a championship round win, earned courtesy of his 89.5-point effort aboard Reloaded. Earning 61 national points, Richardson climbed to No. 2 in the national standings, trailing only No. 1 Kleier by 16 points. When the season continued the next night at Great Western Hotel, Richardson was unable to replicate his success, bucked off by Tribal in a quick 2.25 seconds. As a result, he slipped to No. 3 in the national standings, now 33 points behind No. 1 Macaulie Leather and 16 points removed from No. 2 Kleier. Richardson will look to gain ground in the standings at Hervey Range Rodeo Grounds when he attempts Dizzy Limits in Round 1.

WELCOME BACK WILKINSON – This weekend in Alice River, for the first time since March 2020, the PBR draw will feature 2017 PBR Australia Champion Troy Wilkinson. After taking up steer wrestling at the onset of the COVID-19 pandemic, Wilkinson dislocated his shoulder the day before the league’s return in Caboolture in a freak accident at a local jackpot. As a result, Wilkinson was sidelined for the remainder of the season, undergoing reconstructive surgery in December. In the months since, Wilkinson has been committed to his rehab and will make his return to competition this weekend. Already tapped to captain Team New South Wales at the 2021 PBR Origin event, Wilkinson has drawn Down and Dirty for his first bull back in PBR Competition.

FAMILIAR WATERS – At the PBR Australia Back to the Heartland Series event held in tandem with the North Queensland Elite Junior Rodeo, two riders will face rematches in Round 1. Of the duo, just one rider, Caiden Sandilands, has previously covered their bovine athlete opponent. Having met just once prior, Sandilands covered Super Natural for 84 points last October in the opening iteration of the double-header held in Bundaberg, Queensland. For 2016 PBR Australia Champion Cody Heffernan, he will look to reverse his fortunes aboard Ranga. Having faced off against the bull one prior this season, going head-to-head in Round 2 of the second tour stop of the year in Rockhampton, Ranga bucked off Heffernan in 2.72 seconds.

BULL PEN – At this weekend’s PBR event held in tandem with the North Queensland Elite Junior Rodeo, Colin Fry Bucking Bulls will make their league debut after the outfits animal athletes have been finding success at rodeos across Australia. Boasting a pen of eight bulls, two of the bulls have previously bucked at PBR events under the ownership of Wallace Bucking Bulls – Super Natural and Down and Dirty. Both slated to buck in Round 1 of the event, Caiden Sandilands has drawn Super Natural, while Troy Wilkinson will go head-to-head against Down and Dirty. The remainder of the pen includes: Dizzy Limits (Round 1 vs. Lachlan Richardson); Tap Out (Round 1 vs. Eli Bee); Chasing Dragons (Round 1 vs. Macaulie Leather); Rocky Top (Round 1 vs. Dan Ruhland); Living on Dreams (Round 1 vs. Joseph Down); and Gangster’s Retreat (Championship Round).

The drawn will also be headlined by Cattle King Boogers Beach, slated to buck in the championship round. Bucking at the first two events of the season, both held in Rockhampton, Boogers Beach was the high-marked bull at each tour stop. At the season-launch event, Boogers Beach was marked 45 points for his 6-second buckoff of Macaulie Leather. The very next day, Boogers Beach posted the top score of his PBR career, once again bucking off Macaulie, this time in 2.49 seconds to earn a 45.5-point score.

NEXT UP – The 2021 PBR Australia season will continue on June 12 in Rockhampton, Queensland, at the Great Western Hotel for the Monster Energy Tour’s Rockhampton Invitational, part of the league’s Back to the Heartland Series. Action will get underway on Saturday at 7:00 p.m. AEST.