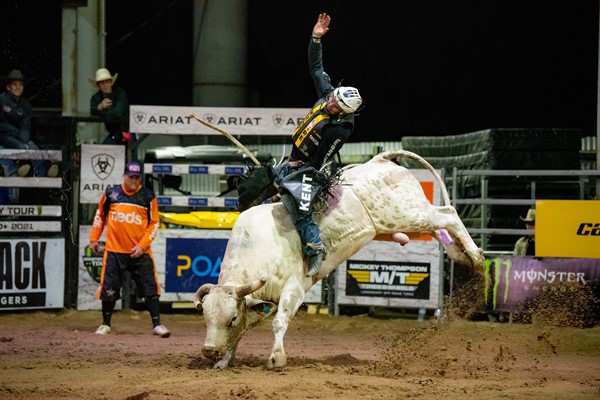 After a big month on the road, the PBR Australia Monster Energy Tour returns to the heartland tonight for another Saturday night of bull riding inside Rockhampton’s Great Western Hotel.

Thirty riders will go head-to-head in a more traditional long round-short round event format. Standing in their way is a fascinating pen of bucking bulls that features a good mix of the known and the unknown.

Here are my highlight matchups for Round 1 of the event:

View the daysheet for the 2021 Rockhampton Invitational - Event 7.

Macaulie Leather on Ranga (Dittmann Bucking Bulls)
In the most anticipated matchup of the night, we will see the leader in the race for Rookie of the Year go up against the rankest bull in the long round pen. Leather probably didn’t have the success across his Origin campaign that he had hoped for, but he still managed to add another top-6 finish to remain second in the National Standings. Ranga has bucked off his last eight challengers. He likes to turn back sharply to the left and bucks hard and fast in the gate. That will give the Calliope cowboy a chance to make a good start into his riding hand, but he will have to continue that hustle to stay on top and make the whistle.

Jake Curr on Top Deck (Kleier Bucking Bulls)
We haven’t seen much of the Mount Isa young-gun so far this season, but this looks like an excellent opportunity for him to put together his first qualified ride of the season. Top Deck has been ridden four times so far in his PBR Australia career, with scores averaging just below the 83-point mark. He is yet to face a left-handed rider, but there doesn’t appear to be any tricks in his action. He turns back to the right, not far from the chutes and puts in an honest effort. That means Curr will have to make the ride away from his hand, but he did that plenty of times during his rookie year.

Brady Fielder on Code Blue (Kleier Bucking Bulls)
Code Blue has faced six right-handed riders in his PBR Australia career, and two of those cowboys made the whistle for low-80-point scores. The other four righties all made it well into the second half of the rides, with buck off's averaging 6.41 seconds. Those figures will encourage Fielder, who has been almost unbeatable riding bulls that turn back to the right and into his hand so far this season. The Clermont talent had an up and down start to the 2021 PBR Australia Origin series but this could be the ride he uses to lift his riding percentage and get back in the race for the National Championship.

Lachlan Slade on Roam Aviation High Risk (Dunne Bulls)
You'd be hard-pressed to find a more in-form bull rider in Australia at the moment than Lachlan Slade. He won three of the six rounds of Origin competition earlier this month. This is a rematch from one of those events in Brisbane, where the bull won the battle in 6.37 seconds. Roam Aviation High Risk has now given up three qualified rides from his seventeen PBR Australia trips after Aaron Kleier scored 84.5 points in Brisbane earlier this month. This bull likes to take a few long leaps from the chute to stretch the rider out and then turn sharply back to the right and settle into a good rhythm. That will be into the Tamworth bull rider’s hand, and he will be hard to shake off if he can maintain contact with his bull rope during the first half of the ride.

Caiden Sandilands on Bang Ya Drum (Dunne Bulls)
Sandilands hasn't had the best run through the last couple of months since finishing in the money here at the 'The Arena' during May. Tonight, he gets a good chance to snap a seven-out buck off streak. He took on Bang Ya Drum just a few weeks ago at Origin I, taking the bull to 6.37 seconds. This bull is unridden so far in his PBR Australia career, bucking off seven riders with the clock stopping at an average time of 4.09 seconds. He will turn back into the Rockhampton talent's left riding hand, and that will give Sandilands another good chance at making the whistle.

Lawson Nobbs on Gangster’s Retreat (CF7 Bucking Bulls)
These two athletes combined for a round winning 84.5-point ride at the North Queensland Elite Touring Pro back in May, and I think they can repeat the effort here in Rockhampton. Nobbs has been sensational so far this season. Across the first two events of the Origin series, he covered three of his five draws and picked up the aggregate win in Cairns. I haven't seen much of Gangster's Retreat in the flesh, but from what I have seen, he likes to turn back to the left and get down to business directly in front of the chute. That will be into the Moura cowboy's hand as he looks to continue his hot early-season run.