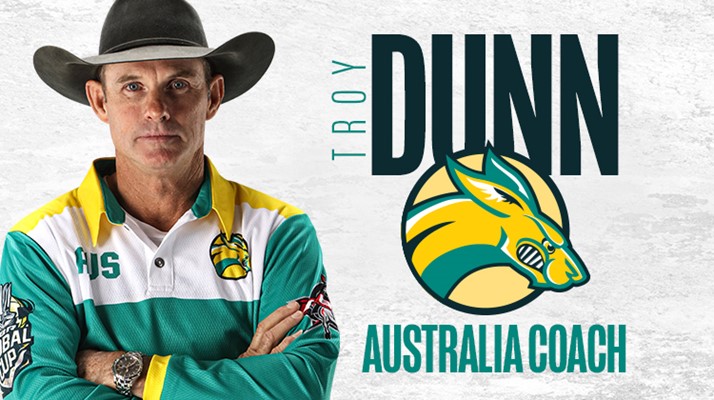 The 2022 PBR Global Cup USA will be held at AT&T Stadium in Arlington, Texas, on March 5.

PUEBLO, Colo. – Ahead of the 2022 PBR (Professional Bull Riders) Global Cup USA, the PBR today announced the six coaches who will lead the competing teams inside AT&T Stadium in their quest for national pride, including 1998 PBR World Champion Troy Dunn (Bloomsbury, Queensland, Australia) who will return to helm Team Australia for the fourth time.

The fifth edition of the PBR Global Cup, the only nation vs. nation bull riding competition, will make its third stop at AT&T Stadium in Arlington, Texas on March 5, 2022. The new team tournament debuted in Edmonton, Alberta, in November 2017, visited Sydney, Australia, in June 2018, and made subsequent stops in Arlington in February 2019 and 2020.

The 2022 PBR Global Cup USA will feature six teams representing Australia, Brazil, Canada, Mexico, and the United States. For their home-nation advantage, the USA delegation will field two squads via the Eagles and all Native American Wolves.

Troy Dunn – Team Australia: Legendary Australian bull rider Dunn first joined the Global Cup ranks in 2018 when he assumed the duties of head coach for the event’s debut in Sydney. Competing on home soil, the Queensland native led his team to a valiant runner-up finish. Dunn has since returned for each subsequent iteration of the event, leading Team Australia to a fourth-place finish in 2019 and 2020. Dunn, an eight-time PBR World Finals qualifier, is the lone Australian to ever be crowned a PBR World Champion. Additionally, he won the most prestigious event in bull riding, the PBR World Finals, in 1995 and 1997. He is one of just four athletes in history to win the World Finals in multiple seasons.

Ross Coleman – Team USA Eagles: Previously aiding Team USA Eagles as an assistant coach, 2012 PBR Ring of Honor inductee Coleman will assume head coaching responsibilities for the Eagles delegating for the first time in 2022. A 13-year veteran of the PBR, Coleman qualified to the prestigious PBR World Finals annually from 1999-2010. Coleman is one of only seven riders to register more than 400 qualified rides in his career on the elite Unleash The Beast, retiring in 2011 with 402 qualified rides, 42 of which were for 90 points or more.

Ryan Dirteater – Team USA Wolves: On the spurs of his retirement at the conclusion of the 2020 season, Dirteater, also know as the “Cherokee Kid,” will return to the PBR in 2022 when he makes his head coaching debut for Team USA Wolves. No stranger to the event format, Dirteater rode for Team USA Wolves at the 2019 iteration of the event and was then an honorary assistant coach in 2020 after he was unable to compete due to fractures of his upper thoracic spine. During his career, Dirteater qualified to the PBR World Finals 12 times, winning the marathon event in 2016.

Robson Palermo – Team Brazil: 2021 PBR Ring of Honor inductee Palermo will return to guide Team Brazil after making his coaching debut at the inaugural PBR Global Cup in 2017 where the South American nation finished second. One of the PBR’s most accomplished riders, Palermo is the only three-time PBR World Finals event winner and the only back-to-back winner (2011-2012). Palermo went a torrid 32-for-57 (56.14%) in 10 World Finals appearances. He also won 13 premier series events in his career and recorded 37 90-point rides on the premier series before retiring in 2018.

Tanner Byrne – Team Canada: Byrne will make his coaching debut at the 2022 PBR Global Cup USA but is no stranger to the international team event. Byrne represented the Maple Leaf at the first three iterations of the event prior to retiring as a bull rider in 2019. During his career as a rider, Byrne qualified for four PBR World Finals and won three premier series events. While Byrne may have hung up his chaps, he did not leave the industry. In addition to assisting with his family’s stock business Flying Four Bucking Bulls, Byrne has followed in the footsteps of both his father Ryan and brother Jesse, now an accomplished bullfighter in both Canada and the United States.

Gerardo Venegas – Team Mexico: The 2022 PBR Global Cup USA will mark Venegas’ fourth time in the coaching role for Team Mexico, after assuming leadership of the squad in 2018. During his seven-year career with the PBR, Venegas became the first Mexican-born rider to reach the PBR World Finals. He first rode at PBR’s elite level in 2003, winning the third event of his career at the premier series stop in Grand Rapids, Michigan. Qualifying for the World Finals in 2003, Venegas advanced to the sport’s most prestigious event again in 2005, where he finished 14th in the event average.

At the 2022 PBR Global Cup USA, each team will be comprised of five competing riders, all selected by the nation’s coach.

The one-day event will feature two rounds of competition, where three riders from each team will attempt one bull. Throughout those rounds, every rider from each team must attempt a minimum of one bull. Following the initial rounds, each team will select one rider to attempt the nation’s final bull in the bonus round. The 2022 PBR Global Cup USA Champion will be the team with the top combined score through their seven outs.

The 2022 PBR Global Cup USA will mark the first iteration of the event since 2020 when Team USA Eagles made history as the first nation to defend home soil. Two-time PBR World Champion Jess Lockwood (Volborg, Montana) and Cole Melancon (Sour Lake, Texas) each went 2-for-4 to champion the nation’s victory.

Additionally, in winning the 2020 PBR Global Cup USA, Team USA Eagles joined Team Brazil as the only nations to win the event multiple times, victorious at the inaugural PBR Global Cup in Canada in 2017.

Adding to the blockbuster weekend, via a landmark partnership between PBR and Teton Ridge, following the PBR Global Cup USA, The American will take over the home of the NFL’s Dallas Cowboys on Sunday, March 6 starting at 12:00 p.m. CST.

The American and PBR last united for a historic weekend of Western sports at AT&T Stadium in 2018. Throughout the weekend, PBR set a record for the highest-attended, single-day event in its history, hosting more than 46,000 fans inside AT&T Stadium for the elite tour Major.

Tickets for both events are on sale now and can be purchased at ATTStadium.com or SeatGeek.com. Tickets for both events start at just $20, taxes and fees not included. While individual event tickets are available for purchase at varying price levels, fans can save up to 20% by purchasing weekend combo packages to experience both Saturday and Sunday.

For fans wanting to make this one-of-a-kind weekend even more memorable, VIP tickets are available for both the PBR Global Cup USA and The American. Guests can enjoy premium seating closest to the action, question-and-answer presentations, behind-the-scenes-tours and much more. For more information or to purchase VIP tickets and premium experiences, event-goers can visit SeatGeek.com.