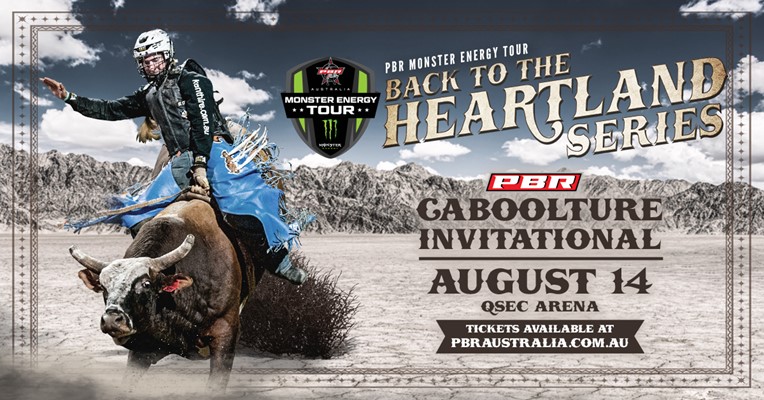 The league’s Back to the Heartland Series will be held throughout 2021, travelling to iconic western sports venues and locales throughout Australia that have impacted and help shape the western lifestyle in the nation.

The PBR Caboolture Invitational will follow QSEC Arena’s COVID-Safe Plan and abide by a series of health standards and protocols guided by the Queensland state government industry framework for safe events during COVID-19 (coronavirus).

In 2020, PBR Australia’s Monster Energy Tour not only debuted in Caboolture, but the league held its triumphant return to competition in the city, emerging from a 203-day hiatus from live events following the onset of the COVID-19 pandemic.

McArthur notched his career-first PBR Australia victory courtesy of a perfect 2-for-2 performance, highlighted by the high-marked ride of his career, an 87.5-point effort aboard Annihilation (Brandenburg Bucking Bulls) in the championship round.

Also recording his first-ever PBR Australia event win in Caboolture, Pavlou’s golden finish was also headlined by the high-marked ride of his young career. Going 1-for-2, Pavlou claimed the event buckle after covering Black Rat (Stuart Timm) for 83.5 points in Round 1.

PBR Australia will return to Caboolture with an already fierce battle for the 2021 PBR Australia National Championship brewing.

The electric young gun made a statement in the first two events of the season. Also marking the first PBR events of his career, after finishing fourth at the season-launch event, Leather won the second event of the year in Rockhampton to surge to the top spot in the national standings

Three-time and reigning PBR Australia Champion Aaron Kleier (Clermont, Queensland), however, is hot on Leather’s spurs, currently No. 2 in the standings as he attempts to become the first rider in league history to win the national title in four consecutive seasons.

At the season-launch event, Kleier was seemingly unstoppable. In Round 1, the 23-year-old rode Black Tuxedo (Peter Wallace) for a career-best 90.5 points en route to the event victory.

In a repeat of a contentious battle witnessed throughout 2020, seven-time PBR World Finals qualifier Lachlan Richardson (Gresford, New South Wales) is keeping pace with both Kleier and new contender Leather.

The bull riding action for the PBR Caboolture Invitational begins at 7:00 p.m. AEST on Saturday, August 14 at QSEC Arena. After all competing riders attempt one bull each in Round 1, the Top 10 will then advance to the championship round for one more out and a chance at the event title. In addition to competing for points towards the Australian national standings, riders will also vie for crucial points towards the World Finals.

Tickets for the PBR Australia Monster Energy Tour’s Caboolture Invitational are on sale now for $40, taxes and fees not included, and can be purchased at PBRAustralia.com.au.