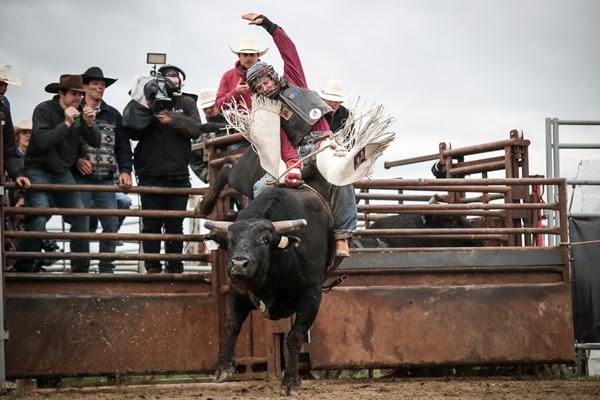 PRINCE ALBERT, Sask. – The 2021 PBR (Professional Bull Riders) Canada season launched in electric fashion Thursday evening, as the battle for the year’s PBR Canada Championship got off to a fierce start at the Tanner Byrne Invitational, presented by Lipsett Cartage, in Prince Albert, Saskatchewan.

Electing to remain in Canada for the start of the 2021 season, Australian sensation Callum Miller (Warwick, Queensland) was third.

Despite bucking off in Round 1, bested by Broken Trigger (Skori Bucking Bulls), Miller was one of three riders to advance to the championship round on time.

Making the most of his second chance, Miller rode Rhythm & Blues (Flying High Rodeo Co.) for 88.5 points to surge to third-place on the event leader board.

The two-time PBR Canada Champion began his quest for a historic third national title in Round 1 when he covered Claude (Skori Bucking Bulls) for 83.5 points.

Tied for second entering the championship round, Lambert faced a rematch in Catch My Drift.

While the Albertan rode the powerful bovine athlete in their first meeting, scored 87 points in Stavely, Alberta, in September 2018, Catch My Drift bucked Lambert off in their most recent showdown in March 2019 in Calgary, Alberta, dispatching him in a quick 3.31 seconds.

In the duo’s rubber match, Lambert proved the more dominant athlete, going the distance atop Catch My Drift for a monstrous 90.5 points, the first 90-point ride of the 2021 PBR Canada season.

With a combined 174.5 points aboard his two draws, Lambert surged to the event lead.

Also going a perfect 2-for-2, 2018 PBR Canada Rookie of the Year Nick Tetz (Calgary, Alberta) is currently second at the Tanner Byrne Invitational, trailing Lambert by a mere 0.5 points.

Tetz began the event on a high note, winning Round 1 courtesy of his 85-point ride on Lanham Kid (Two Bit Bucking Bulls).

In the championship round, the Calgary-native then delivered the high-marked ride of his career, making the 8 atop 2019 PBR Canada Bull of the Finals Finning Lil Shorty (Flying Four Bucking Bulls) for 89 points.

Going 1-for-2, the 25-year-old tied for second in Round 1, riding Dejango (Skori Bucking Bulls) for 83.5 points, but wasn’t able to remain perfect when he was brought down by Duke Ka Boom (Flying Four Bucking Bulls) in the championship round.

Fans can relive all the action from the opening night of competition of the event on Thursday, June 17 on Cowboy Channel Canada at 5:00 p.m. MT. A repeat airing will also be telecast on Sunday, June 20 at 3:00 p.m. MT.

The Tanner Byrne Invitational, presented by Lipsett Cartage, concludes on Friday, June 11 at 6:30 p.m. CST at the Byrne Ranch in Prince Albert, Saskatchewan.