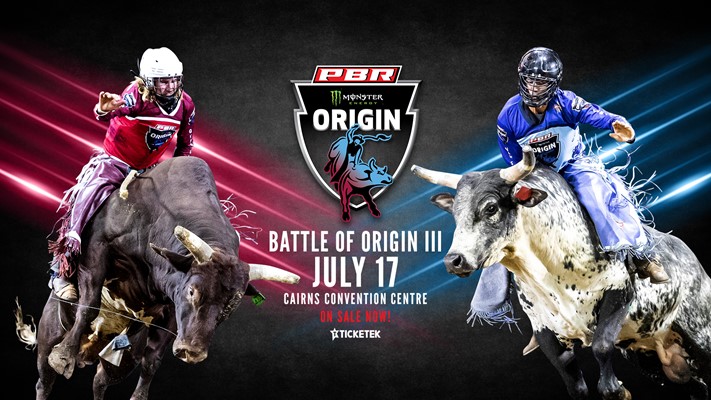 After holding the inaugural PBR (Professional Bull Riders) Origin event in 2019, the league will once again stage the highly anticipated state vs. state western sports showdown in 2021, holding the final installment of the three-part series of events July 17 in Cairns, Queensland, at Cairns Convention Centre. Team Queensland and Team New South Wales will go head-to-head to determine which state is the supreme bull riding powerhouse.

The 2021 PBR Origin lIl - Cairns will abide by a series of health standards and protocols as approved by Queensland Health, including:

For each iteration of the 2021 PBR Origin, each team will be comprised of 10 riders, including a Captain. Three-time, and reigning, PBR Australian Champion Aaron Kleier (Clermont, Queensland) will lead Team Queensland, while 2017 PBR Australia Champion Troy Wilkinson (Upper Horton, New South Wales) will return to captain Team New South Wales.

While the Captain will ride at each of the three events, the remaining nine positions will be filled based on world and national standings at preselected dates throughout the season. With more than $45,000 on the line, and crucial national points awarded to the competing athletes, the PBR Origins Champion will be the team that wins two or more events in the series.

When PBR last travelled to Cairns in 2019, Team Queensland Captain Kleier went a near perfect 2-for-3 to claim the event win. The victory was one of five for the now 23-year-old that season en route to his second consecutive PBR Australia Championship.

The league’s debut event in Cairns in 2014 was won by seven-time PBR World Finals qualifier Lachlan Richardson (Gresford, New South Wales). Still a dominant contender amongst the PBR ranks, Richardson was locked in a feverish battle alongside Kleier last season for the national championship before an injury on the final day of the season put a heart-breaking end to his quest for the 2020 PBR Australia Championship.

The bull riding action for PBR Origin III – Cairns begins at 7:30 p.m. AEST on Saturday, July 17 at the Cairns Convention Centre. The event will feature three rounds of competition. After each of the 10 competing bull riders for both teams attempt one bull each in Round 1 and Round 2, the Top 4 riders from each team will advance to the bonus round for one final out. The event winner will be the team with the highest combined score in the event aggregate.

In addition to vying the title of PBR Australia Origin Champion and their share of the event purse, riders will also be competing for points towards the Australian national standings and broader PBR World Standings.

Tickets for the PBR Origin III – Cairns are on sale now, starting at $32.15, standard fees may apply, and can be purchased at Ticketek.com.au or pbraustralia.com.au.