Richardson lights up Ballarat and leaves as new Aussie No. 1. 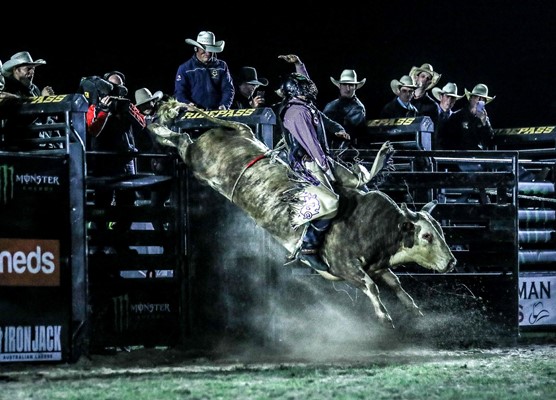 On a cold and blustery autumn night in the Central Highlands of Victoria, it was Lachlan Richardson who turned up the heat to be crowned Champion at the 2020 Ballarat Stampede on the PBR Australia Monster Energy Tour.

The Gresford bull rider provided the spark on an otherwise disappointing night for the cowboys, producing a perfect 2-for-2 riding performance despite a dominant showing by some of the rankest bucking bulls in the country who limited the 27-rider field to just three qualified rides.

After entering the final round in second place, Richardson caught fire in the Championship Round, combining with The D.O.C (Brandenburg and MJ Bucking Bulls) to register a monster ride worth 89.5 points to come from behind and claim the 28th PBR win of his illustrious career.

The seven-time PBR World Finals qualifier had an answer for everything that The D.O.C threw at him during the 8-second matchup that wound its way counter-clockwise across the Ballarat dirt. The score posted by the pair is the highest seen during the current PBR Australia season. It also equals the previous high-marked rides recorded on tour in the past 18 months of competition.

“There is not much better than coming down here and getting the win on good bulls like that,” Richardson chirped during the buckle presentation.

“I work hard every single day of my life to come out here and do it in front of good crowds like this,” he added.

Earlier in the evening, the 27-year-old covered the previously unridden Mind Games (Woodall Rodeo Company) in a rough ride which had Richardson fighting to stay in touch as the bull ducked and dived his way across the arena. The 80-point score made up the remainder of his total 169.5 aggregate points and placed him second in Round 1.

The opening round was won by Merrijig talent Will Purcell who had his home-state crowd on their feet following his spectacular 84.5-point ride aboard Berzerk (Brandenburg and MJ Bucking Bulls).

It was the second time in PBR competition that the pair had met up, and the 26-year-old avenged his 2019 Grand Finals buck off with an outstanding ride away from his hand.

Purcell had the final opportunity to surpass Richardson’s two bull score, but he couldn’t cover his Championship Round draw and was left stranded on 84.5 points and a second-place event finish.

Richardson picked up a total of 77 points during his Ballarat win which was enough to move him up from fifth place to sit atop of the 2020 PBR Australian National Standings with 145.5 points. The haul relegates defending Australian National Champion Aaron Kleier to second on the leaderboard and builds a buffer of 27.5 points between the two riders. Richardson also collected 30 World Points, which sees him positioned inside the Top-20 of the 2020 PBR World Standings.

Purcell earned 55 points towards the end of season prize, which pushed him up into fourth place, 49 arrears of the new No.1 ranked bull rider in Australia.

The bullpen turned in their best performance of recent seasons bucking off 91.43% of their opponents and posting an average bull score of 41.61 points, which sits slightly above the average mark recorded on the Monster Energy Tour since the corresponding event last season.

Mystery from Maynes Bucking Bulls and The D.O.C from Brandenburg and MJ Bucking Bulls were the two highest marked bovine performers at the 2020 Ballarat Stampede, with both bulls awarded 44 points by the judges to split Bull of the Night honours.

The North Queensland based Brandenburg Bucking Bulls and MJ Bucking Bulls partnership also picked up their second Champion Bull Team win of the season with The D.O.C ably supported by his pen mates Annihilation (43 points) and Gangatino (42.5 points) in the short round.

Next, PBR Australia competition heads to Yass in New South Wales for the annual Southern Tablelands Touring Pro Division stop on Saturday, 21 March 2020 before returning to Geelong in Victoria on Saturday, 28 March 2020 for the inaugural Monster Energy Tour event on the shores of Corio Bay.