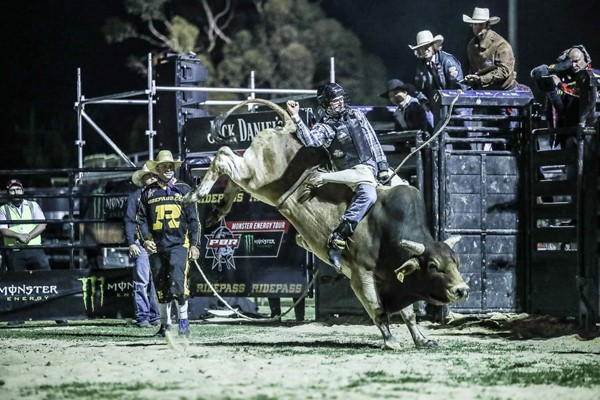 At the first-ever PBR Australia Monster Energy Tour event in North-West Victoria, Lawson Nobbs went a perfect 2-for-2 to win the 2019 Mildura Invitational.

The Moura bull rider was one of four cowboys to deliver a perfect performance, accruing an aggregate total of 168.75 points.

Nobbs opened his account with an 84.25-point ride aboard Wallaby Bob (John Gill & Sons) in the opening section of Round 1, with the score good enough for a third-place result.

The 22-year-old backed ride that up with another third-placing in Round 2, combining with High Flying Akubra (John Gill & Sons) for a further 84.5 points.

Entering the event in fifteenth in the PBR Australian National Standings, Nobbs picked up 450 points to rocket up the standings and land in eighth place despite attending just six home events this season.

Nobbs held off Nathan Burtenshaw, Aaron Kleier and Cliff Richardson in a frantic final round of the competition to claim his fourth PBR event win of the season.

Nathan Burtenshaw placed fourth in the opening round, thanks to an 83.5-point effort aboard Mr Fabulous (McPhee Rodeo Co.).

The Coonamble talent then took full advantage of a re-ride opportunity in the final out of the night. Burtenshaw covered Twisted T (Throsby & Russell Bucking Bulls) for fourth in the round and 83-points, which took his total score to 166.5 points.

Ratings leader Aaron Kleier produced his 22nd Top-5 finish of the year and extended his lead at the top of the Standings with a 170-point haul.

Adding to his seventh-place finish in the opening round, the 19-year-old then produced an 85-point effort aboard Gold Bandit (John Gill & Sons).

The Clermont bull rider’s score was enough to place second in the final long round.

Finishing in fourth place was Gresford’s Cliff Richardson, who wound up with a 160.5-point aggregate total.

The 28-year-old was marked 77.75 points for an eighth-place finish in Round 1 after he covered Battle Jack (Throsby & Russell Bucking Bulls).

Richardson’s second score came aboard Southern Man (Throsby & Russell) with the pair combining for 82.75 points. He added 90 points to his year total and remains entrenched inside the Top-5 on the standings leaderboard.

Finishing with the highest single ride score of the night and in fifth-place was J.C. Davis.

The New Zealander combined with Bad Apple (Throsby & Russell Bucking Bulls) for 88.5 points in Round 2.

Davis now finds himself ranked just outside the Top-30 in the standings thanks to his 145-point night.

Round 1 winner Jay Borghero also made a jump up the standings, and he now sits on the bubble in eighteenth place after earning 120 points.

Finishing in seventh place was Lachlan Richardson who was marked 87.5 points in Round 1 aboard Laramie (Throsby & Russell Bucking Bulls).

The Gresford cowboy ended the night with 75 points earned to hold his position in the National Standings.

It was an eighth-place, 40-point finish for Brady Fielder who now trails Kleier by 840-points.

Eidsvold’s Sam Woodard was the final rider featured on the Mildura leaderboard after he put up 83-points on Hangover (Throsby & Russell Bucking Bulls) in Round 1.

The young-gun edged himself closer to a Grand Finals berth, and he now sits just outside the cut line following a 25-point gain.

The high marked bull of the night was Wild Paint from Throsby & Russell Bucking Bulls. The bovine athlete was marked 43.75 points in his 5.86 seconds, Round 2 matchup with Budd Williamson.

The riding percentage was above par as expected and came in over 7% higher than the yearly average of 31.01%. The average bull score was slightly higher than usual at 41.57 points.