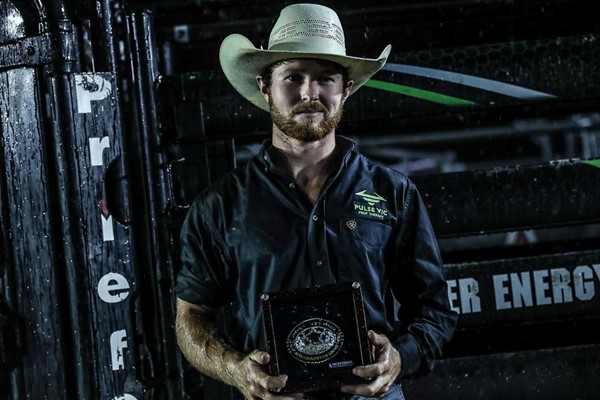 Just a week after being crowned Champion Bull Rider of the Australian Professional Rodeo Association, Will Purcell went 3-for-3 at the 2019 Wodonga Invitational to add a PBR Australia Monster Energy Tour buckle to his collection.

The Victorian finished atop the Wodonga leaderboard with an aggregate total of 255-points to hold off the Top-4 riders in the PBR Australian National Standings who filled the remainder of the placings.

Purcell started his night right, splitting the Round 1 win thanks to an 83.75-point ride aboard Cowboy Tough (Diamond S Bucking Bulls) who turned back to the right.

The 25-year-old then shared a third-place finish in the second round after combining with Maximum Rat (George Hempenstall) for 83.5 points.

Entering the Championship Round in second place, Purcell set up a rematch with Ransom 2 (John Gill & Sons). The pair had previously met in Melbourne earlier this season with the bull coming away with the win on that occasion, but Purcell got his revenge in Wodonga, scoring 87.75 points to win the round and stay perfect on the night.

It was Purcell’s highest marked ride in the past two years of competition and his first win at the Monster Energy Tour level. The 625-point haul pushes him to No. 9 in the standings with just one event remaining before the 2019 PBR Australia Grand Finals.

Cliff Richardson added another second-place finish to increase his chances of PBR World Finals qualification thanks to a buck-off free, 252-point performance.

In the final round, Richardson would face On Point (Throsby & Russell Bucking Bulls). The pair had previously done battle in the Wodonga dirt last season, with the Gresford cowboy scoring 86-points on his way to a runner up finish.

The result of the rematch would also go the way of the rider, with Richardson scoring 87-points to secure a fifth straight Monster Energy Tour cheque.

Richardson collected 425 championship points to jump into No. 3 in the National Standings. He also earned 90 world points to move clear of the World Finals bubble and into the No. 36 spot with just the Velocity Tour Finals remaining.

View the full results from the 2019 Wodonga Invitational.

Finishing in third place was No. 1 ranked Aaron Kleier who extended the gap between himself and Brady Fielder with a 2-for-3, 169.25-point night.

The Clermont bull rider picked up 280 points and the gap is now out to over 1000-points in his quest for a second-straight Gold Buckle.

Kleier rode Buck (Diamond S Bucking Bulls) in Round 1 for 83.5 points with the remaining 85.75 points coming in the Championship Round aboard Mr Fabulous (McPhee Rodeo Co.).

Despite leading the pack into the final round of the night, Lachlan Richardson wound up in fourth place on 169-points.

The 27-year-old shared in the Round 1 spoils with Purcell thanks to an 83.75-point ride aboard Switch Back (Throsby & Russell Bucking Bulls).

Richardson then took maximum points from Round 2 after combining with Wallaby Bob (John Gill & Sons) into his hand for 85.25 points.

The finish earned Richardson 285-points championship points, meaning he slips to fourth in the standings.

No. 2 ranked Brady Fielder was the best of the riders to finish with one score on the board.

The Clermont Rookie made a great bull ride aboard Coors Light (John Gill & Sons) in Round 2 for 83.5 points.

It may well prove to be the most important ride of the season for Fielder, with the 15 world points moving him into 33rd and almost guaranteeing him a spot inside T-Mobile Arena later this week.

Wilkinson handled everything that Rugged Ridge (McPhee Rodeo Co.) threw at him in Round 2 for 81.75 points, while Robards was marked 80.25 points for his ride on Vertical Exit (John Gill & Sons) in the opening round.

George Hempenstall‘s Stealth was the high marked bucking bull of the night, marked 44-points in his 5.15-second bout with Troy Wilkinson in the Championship Round.

A qualified ride rate of 35.13% was recorded by the riders and that is about 4% higher than the 2019 average. The bulls were marked an average bull score of 41.4 points which is right on the yearly average.