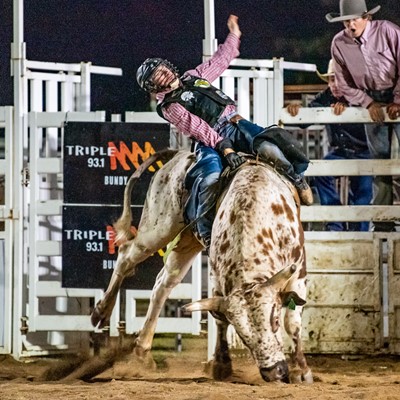 Tamworth bull rider Ethan Watts broke through for his first PBR Australia event in front of a packed house at the 2019 Burnett Heads Touring Pro on Saturday.

"Yeah, it feels pretty good. It's been a long time coming, but finally it's happened," Watts said with a big smile on his face.

After bucking off in Round 1, Watts added his name to the leaderboard by producing a brilliant aboard Specsaver (Wallace Bucking Bulls) in the second round of the competition. The bull turned back to the right, and the 27-year-old made no mistakes, matching Specsaver for 85 points.

The single ride score placed Watts in the No. 2 spot entering the final round of the night.

Watts then lit up Jack Norgate Oval with a flawless 88-point ride aboard the previously unridden Bud Buster (Kasper Bucking Bulls/JD Bucking Bulls) in the Championship Round.

"That's the first time I have seen [Bud Buster]. The contractor told me he hadn't been ridden yet so that always gives you a bit more drive," said Watts.

"You wanna be the first guy to ride those types of bulls."

"He just kicked out a couple and turned back into my hand, and it was game on from there."

"I got a few good results at the start of the year, but I have been struggling at the last few events and got in a bit of a hole. When you get in those holes, you can't let it get the better of you. Otherwise, it will get you down," said Watts.

"Every time I come to a bull ride; I just forget about the last event treat it as a new one."

"Now I just need to put another one together next weekend". he added.

Watts' aggregate total of 173 points was enough to defeat Aaron Kleier who finished with 170.5 points.

The 2018 PBR Australian National Champion became the first rider to cover two bulls after combining with Iron Jacket (Wallace Bucking Bulls) for 87 points in the final round. The bovine turned back to the left with the pair matching blows until the whistle blew for the second-highest scoring ride of the night.

Earlier, Kleier had covered Mighty Whitey (Wallace Bucking Bulls) for 83.5 points. The big horned bull turned back into his hand which placed Kleier in the No. 4 spot entering the final round of the 2019 Burnett Heads Touring Pro.

The Clermont cowboy finished in second place, extending his lead in the race for the gold buckle after adding 200 points and $1,995.64 to his 2019 totals.

Cliff Richardson finished third in the event as the best rider with one qualified ride recorded.

The 28-year-old dominated Django (Wallace Bucking Bulls) into his hand for 86 points to win Round 2 of the event.

Richardson collected 165 points to close the gap between himself and the top-5 in the 2019 PBR Australian National Standings. He also earned $1210.47 for his performance.

Dungog young-gun Oscar Leake finished in fourth place after winning Round 1 with an excellent ride aboard Jackie Who (Dunne Bulls).

Rounding out the top-5 at the 2019 Burnett Heads Touring Pro was Gresford's Lachlan Richardson who combined with How Bout Dat for 82.5 points in Round 1.

The seven-time PBR World Finals qualifier pocketed 95 points and $667.39 to maintain his fifth place ranking in 2019.

Also finishing the night with a score on the board were Ayr's Budd Williamson, Eidsvold’s Sam Woodard, Grafton's Robert Hicks and Julia Creek's Harry Bridges.

Early in the night, the riders looked on pace to finish above the average riding percentage of 30.98%, but the bulls bucked off 19 straight riders in an incredible run that stretched from the midpoint of Round 1 and middle of Round 2.

Wallace Bucking Bulls' Black Tuxedo was the star of the 2019 Burnett Heads bullpen. He posted 44.5 points in the final out of the night against Cliff Richardson.

It was a rank performance which didn't end after the clock stopped at 3.84 seconds. Richardson was flung across the arena by Black Tuxedo in spectacular fashion, but the Gresford talent emerged unscathed.

Next stop for the PBR Australia Touring Pro Division will be on Saturday, 31 August 2019 in Cunnamulla, QLD.