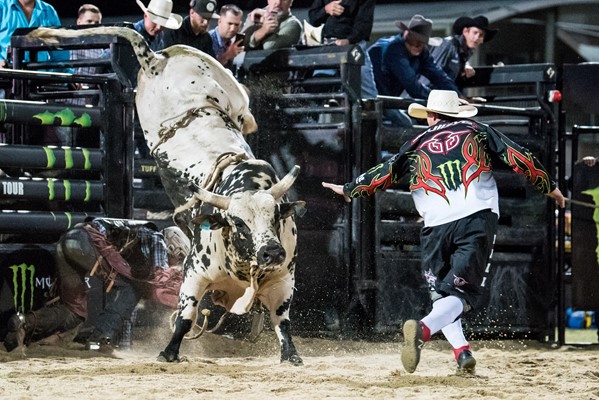 One month out from the Professional Bull Riders (PBR) Grand Finals in Townsville, Dubbo is set be a crucial stop in the race to this year’s PBR Australia title – bringing the nation’s best bulls and riders to the heart of Central Western NSW for a night of make-or-break action.

Kicking off at Dubbo Showgrounds on Saturday, October 20, the Professional Bull Riders (PBR) Monster Energy Tour: Dubbo Invitational marks the first time PBR has staged an event in Dubbo, and the first time a new state-of-the-art, custom built mobile stadium has been used in NSW.

The new touring stadium will give Dubbo fans an unprecedented viewing experience - with every seat offering unobstructed views of all the bull riding action.

The Dubbo Invitational will attract Australia’s bull riding elite for a critical showdown in the countdown to the crowning PBR Grand Finals.

“The fight for the Aussie title is at full throttle pace – it’s down to the wire with only one month until the Grand Finals. Every opportunity for rankings points is critical now, and Dubbo could certainly be an event that makes or breaks title hopes for the top tour contenders. All of the riders are dialled in and have their eye on the prize – so we expect to see some exceptional efforts as the front-runners fight for supremacy, whilst the guys at the lower end of the standings look to secure their Grand Final spot,” said PBR Australia General Manager, Glen Young.

“Both Babbington and Heffernan have nabbed an Australian title in the past, and Kleier and Richardson have been in striking distance before – so we know that all of the boys have the pedigree and potential to rise to the top. With Dubbo being the second last tour stop before the Grand Finals, it could very well be the event that paves the way to the 2018 title.”

The Dubbo Invitational too will attract some of the best bulls in the sport, with superstar bovines set to wow local audiences including the likes of TnR’s ‘Call Me Joe’, John Gill and Sons’ ‘High Flying Akubra’, Hempenstall’s ‘Doorman’ and Kasper’s ‘Villain’.

Glen Young said that in addition to electrifying, world-class competition, Dubbo fans would be able to experience home-turf professional bull riding on a scale they never have before, thanks to the new mobile stadium which debuted earlier this year.

“The new stadium that is heading to Dubbo enables every seat in the house to be no more than 14 metres away from the arena. We’re delivering a major-league bull riding spectator experience, and we’re thrilled to be taking it up a notch for local fans who may have attended PBR competitions in regional venues in the past – as well as new fans keen to see what this global sport is all about,” said Young.

“We’ve already toured the stadium across Victoria and Queensland this year and the feedback from fans has been overwhelmingly positive. It’s helped us nail the brief in terms of delivering what bull riding fans want out of a PBR event – a top-notch experience that can rival what they would see in the US or metro locations in Australia,” he added.

The new stadium boasts a 3,500-capacity, which includes seating for 2,500 and 18 arena-side corporate boxes.

It also features a custom-built mega screen to take the audience behind-the-scenes – inside the bucking chutes – and to give slow motion replays for each ride, as well as the infrastructure needed to host a full after-party event with stage and a rock concert backdrop.

“Once competition comes to a close, we open the stadium up and have a social after-party event with Aussie country Dee Jaye Bux. It’s a great way to round out the night with fans and families kicking up their heels, and also getting the chance to mingle with the riders,” Young said.