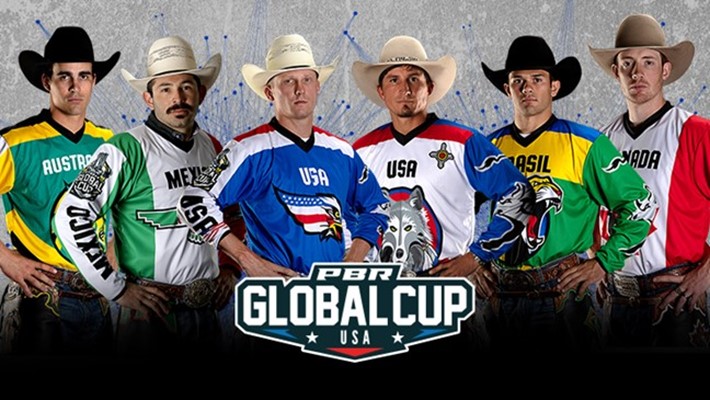 PUEBLO, Colo. – The six coaches for the WinStar World Casino and Resort 2019 Global Cup USA (Feb. 9-10 in Arlington, Texas) each announced on Wednesday the first two riders that will compete on their respective teams.

For the first time in Global Cup history, Team USA will be fielding two different teams inside AT&T Stadium in Arlington, Texas, as the host country.

Previously, the host country received an advantage by fielding more riders whose qualified ride scores contributed to the overall team aggregate. Now the host country will feature two teams competing against each other and the rest of the world. The United States of America will be rooting for two teams to defend its home soil.

Davis has served as Team USA’s Captain for the last two Global Cups, and that will once again most likely be the case in 2019.

The 24-year-old is 5-for-7 in Global Cup competition and won Team USA the inaugural Global Cup title in Edmonton last year with an 89.5-point ride on Catfish John.

In Sydney this past summer, Davis became the first rider to conquer one of the rankest bulls at the time in Australia – Un Broken – for 86.5 points.

Nance is 2-for-5 in two Global Cup appearances, but he is currently the top-ranked American rider in the world standings. He also was the oldest member on Team USA in Sydney.

Team USA Wolves coach Wiley Petersen named No. 14 Ryan Dirteaterand No. 20 Stetson Lawrence to the team. The Wolves will be comprised of only Native American cowboys.

Lawrence will bring experience to the Wolves after competing for Team USA in Sydney, going 1-for-2.

Dirteater turned down an opportunity to compete for Team USA in Edmonton and Sydney. However, Dirteater was a member of the Team USA squad that won the 2009 World Cup event in Barretos, Brazil.  He posted four qualified rides in Brazil and finished fifth in the individual event average.

The host country – Team USA – will be allowed to use all coach’s picks to round out their 8-man rosters (seven riders and one alternate).

McBride and Petersen must submit their next two selections by Oct. 29. Their final three picks and their alternate will be due by Dec. 1.

The visiting countries’ final roster additions will consist of three riders from their national standings (one being an alternate rider) and three additional coaches picks to be announced at a later date (see below).

Team Brazil coach Renato Nunes has elected to bring back world No. 1 Kaique Pacheco and veteran Eduardo Aparecido to the defending champs.

Pacheco was outstanding for Team Brazil in Sydney and led Brazil to the title by going 4-for-4. The 23-year-old was 0-for-2 in Edmonton.

Aparecido is ranked No. 10 in the world standings and is 3-for-4 in two Global Cup appearances.

Nunes will select his next two riders by Oct. 29.

Team Brazil will have their three national standings riders and Nunes’ final pick submitted by Dec. 16.

1998 World Champion Troy Dunn has selected No. 24 Nathan Burtenshawand No. 34 Lachlan Richardson to his squad.

Burtenshaw had the most memorable ride of the Sydney Global Cup when his 84.75-point ride on SweetPro’s Enemies Everywhere appeared to have given the Aussies a sensational victory on the final ride of the event.

However, the score wound up being .75 points short of what Team Australia needed to win.

Burtenshaw took riding for his country as seriously as any of the riders competing at the Global Cup.

The 24-year-old’s passion for the event rivals that of Team USA’ s Davis, and he left it all on the dirt by going 3-for-3 with a torn ACL in his first Global Cup appearance.

Richardson is the most experienced active Australian rider when it comes to competing on American soil. The 25-year-old has qualified for six PBR World Finals and is 3-for-7 in two Global Cups.

Dunn will select his next two riders by Oct. 29.

Team Australia will then have their final three national standings riders and Dunn’s final pick submitted by Dec. 9.

Tanner Byrne returns for Team Canada after his perfect 4-for-4 showing in Sydney. Byrne’s performance seems to get lost in the shuffle because of Pacheco’s event average victory, but other than Pacheco, there was no rider better than Byrne in Sydney.

Meanwhile, No. 13 Dakota Buttar could break Byrne’s PBR record for highest-finishing Canadian in PBR history (No. 8) this season. Buttar is 2-for-4 in two trips to the Global Cup.

Roy will submit his next two coach’s picks by Oct. 29.

Team Canada will then have their three national standings selections and Roy’s final pick on Nov. 25.

Contreras was 1-for-4 in two trips to the Global Cup.

Valdiviezo was unable to compete at the inaugural Global Cup in Sydney because of injuries, but he is a necessity for Team Mexico.

He had two of Mexico’s six rides in Sydney, and has shown some success at the PBR’s higher levels.

Venegas will make his next two selections by Oct. 29.

Team Mexico will have their three national standings picks and Venegas final selection on Dec. 24.

The winning team will be the team with the highest aggregate score based on their best 12 individual rides from all rounds of competition.