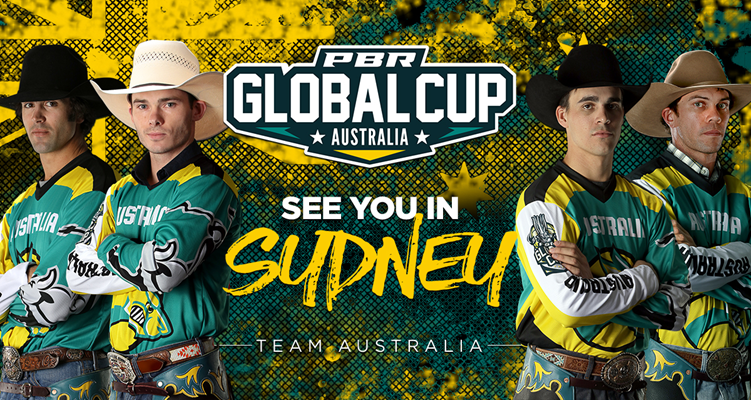 PBR (Professional Bull Riders)has announced the initial lineup of big-gun riders and coaches set to compete in the second leg of the inaugural PBR Global Cupin Sydney on June 9-10.

PBR (Professional Bull Riders)has announced the initial lineup of big-gun riders and coaches set to compete in the second leg of the inaugural PBR Global Cupin Sydney on June 9-10.

‘THE ASHES’ OF GLOBAL BULL RIDING

Running at Qudos Bank Arenaover the Queen’s Birthday long weekend, the GlobalCup is ‘The Ashes’ of global bull riding – pitting the world’s premier bull riding nations Australia, Brazil, Canada, Mexicoand the United States of America against each other in a battle for the title of ‘Toughest Nation on Dirt’.

With a unique competition format, the Global Cup is the largest team event and battle for national pride that global bull riding has ever seen. The event stops in each participating country, offering up record purses, with each national team fighting to retain the host country’s horn from the PBR Global Cup trophy – the crown jewel of global riding.

The 54 kg Global Cup trophy consists of five individual horns, each designed in the country’s national colours and serving as a vessel for their home dirt.

In order to complete the trophy and proclaim world dominance, one team must win and possess each respective country’s horn – but the biggest priority for each team is securing a hometown win to retain their nation’s soil and piece of the Cup.

In each city, the host nation receives a home-turf advantage, fielding a 14-rider team – double the size of the visiting nations’ teams.

Joining them will be current Australian Standings No.2 Fraser Babbingtonand No.4 Cody Heffernan, who will be looking to stamp their mark as Global Cup rookies.

The final seven spots on Team Australia will be decided over the coming weeks.

The selection of Lachlan Richardson is a coup for local fans, with the Gresford-born cowboy usually based in the US competing on the 25thPBR: Unleash the Beast,Real Time Pain Relief Velocity Tour, and Touring Pro Division.

Richardson has been one of Australia’s most celebrated riders since turning pro at the age of 18 – notching multiple titles, competing at the PBR World Finals and, most recently, making a successful return from a bicep injury that sidelined him from the sport for six months.

Joining Lachlan Richardson will be his older brother Cliff Richardson, as well as 20-year-old Clermont sensation Aaron Kleier, who currently sits atop the 2018 PBR Australia national standings, following a breakout 2017 season which saw him crowned Rookie of the Year and narrowly pipped to the PBR Australia title.

Troy Wilkinson has also been selected for Team Australia, booking his place for a run at glory on home-state turf. The Upper Horton cowboy is the reigning PBR Australia Champion, a World Finals qualifier and one of global bull riding’s most formidable competitors.

Rounding out current selection for the Australian team is Coonamble (NSW) cowboy Nathan Burtenshaw, who qualifies on the back of strong results on the US Unleash the Beast Tour. Burtenshaw has jumped to No. 23 on the World Standings in recent weeks, becoming Australia’s highest ranked international bull rider.

Dunn brings with him a wealth of high-pressure, international experience as Australia’s first, and only, PBR World Champion – a title he captured in 1998.

Dunn won the PBR World Finals in both 1995 and 1997 before retiring from the sport at age 38 and being inducted into PBR’s Ring of Honour.

Sure to delight die-hard PBR fans, the international lineup for the Sydney leg of the Global Cup includes a number of all-time-greats from the sport, including past and present World Champions, world title contenders and up-and-coming young guns.

Lockwood made history last year when he became the league’s youngest-ever World Champion at just 20 years-old. In achieving the feat, Lockwood also became one of only two riders in history to claim a world title the year after after being named PBR Rookie of the Year. He won the first three rounds at the PBR World Finals in Las Vegas, another first for the league which is now celebrating its 25th anniversary.

Rivalling the USA’s star-studded lineup is Team Brazil, with a stellar squad that has dominated PBR’s premier tour this season.

The Brazilian charge comprises the top eight Brazilians on the current World Standings, and seven of the world’s current top 10.

Stacking up alongside them iscurrent world No. 3 Luciano de Castro, No.4 Jose Vitor Leme, No. 5 Eduardo Aparecido, No. 6 Claudio Montanha Jrand No.8 Dener Barbosa, with 2008 World Champion Guilherme Marchiacting as the team’s alternate.

Flying the flag for Team Canada is two-time PBR Canada Champion Zane Lambert, the only rider to win the PBR Canada Finals in back-to-back seasons (2016, 2017). Lambert is joined by young-gunsJordan Hansen and Brock Radford – the current No. 1-ranked rider in the PBR Canada standings – as well as ridersDakota Buttar,Tanner Byrne, Lonnie Westand Jared Parsonage.

The 2018 Global Cup coaches, selected following consultation with the bull riders in each competing nation, have also been announced.

Dunn, Nunes and Venegas are all new to leading their country’s quest for global bragging rights and the pursuit of home-nation soil.

- Single-day tickets and two-day packages to the Sydney leg of the PBR Global Cup are on sale now, with the Sunday session guaranteed to be a highlight as the final and deciding chapter in the Global Cup battle plays out.

- The action-packed competition will be followed by an electrifying after-party event with live country music acts and all the bells and whistles of a full-scale theatrical production.