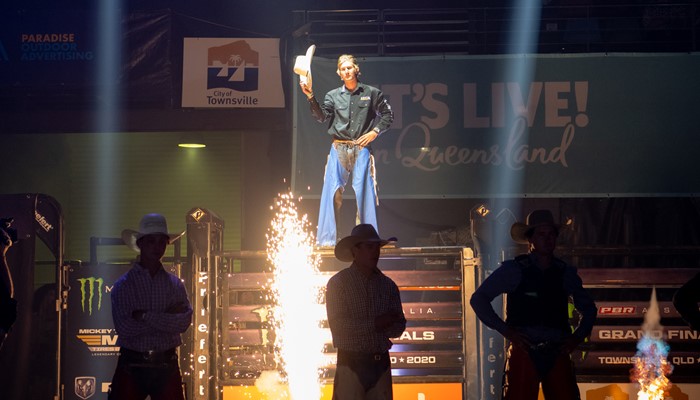 As we enter the final session of PBR Australia competition for the year, the gap between Aaron Kleier and Lachlan Richardson in the National Standings is down to just 29-points, so neither cowboy can afford to slip up in the final rounds.

Last night we saw the riders gain the upper hand in Round 1 with nine qualified rides, but the bulls fought back strong in Round 2 allowing just three scores.

What can we expect to see tonight? I think both long rounds look very even and these are the matchups I can't wait to see:

View the daysheet for Night 2 at the 2020 PBR Australia Grand Finals here.

Lachlan Slade on Mickey Mouse (Wallace Bucking Bulls):
Slade made light work of his Round 1 matchup last night but then ran into the defending PBR Australia Bucking Bull of the Year who posted the highest bull score of the night in Round 2. We haven't seen too many right-handers take on Mickey Mouse, but I think he looks an excellent fit for Slade. He will turn back into the Tamworth cowboy's hand and his timing in his seven PBR Australia trips appears quite good, so this looks a great chance for Slade to add a second score.

Kurt Shephard on Crocodile Rock (Dunne Bulls):
Shephard posted two nice scores last night to sit second in the event aggregate. Here he faces Crocodile Rock, who has been ridden just one time in his seven outs. From the right delivery, this bull likes to take a hop or two out of the chute and turn back to the right. That means he will spin away from Shephard's riding hand, but the Mareeba talent looks to be flying high, and it will take something special to get him in the dirt here.

Aaron Kleier on Seek and Destroy (Dunne Bulls):
Seek and Destroy has allowed three qualified rides since the competition restart two months ago with scores in the low 80-point range. He prefers to turn back to the right, and that will be away from Kleier's hand. Only one left-hander has been successful in this bulls long PBR Australia career, but with the Gold Buckle on the line, I think the Clermont talent can reach the whistle.

Brady Fielder on Get Ya Freak On (Diamond J Rodeo Co.):
Fielder sits third in the aggregate standings, but he has some ground to make up with his low total score. Get Ya Freak On looks a nice draw for him to post a solid score and apply some pressure to the leaders. This bull will turn back into Fielder's hand, and he won't be far from the gate. Look for the Clermont talent to open up late to boost the rider portion of the score.

Lachlan Richardson on Bang and Grind (Kleier Bucking Bulls):
The Gresford bull rider was simply outstanding last night. He leads the event aggregate with two very strong scores, and the Gold Buckle is in his sights. This will be an interesting matchup. We haven't seen too much of Bang and Grind in PBR Australia competition, but he is unridden through three trips, and he likes to turn back to the left. Richardson has let similar bulls that have turned back away from his hand slip by in the past weeks, but he will be hard to beat with his confidence sky-high.

Lawson Nobbs on Barn Yard (Kleier Bucking Bulls):
Nobbs is the best of the riders with one score on the aggregate leaderboard after he produced a nice ride in Round 1. In the third round, his opponent will be Barn Yard, who has given up six qualified rides in his past eight trips with four of those riders finishing in the top-3 in their respective rounds. Five of the last six left-handers have reached the whistle to receive a score. There are lots of statistics that point towards Nobbs completing another 8-second ride here.

Cody Heffernan on Scooby Doo (Kleier Bucking Bulls)
Night 1 was a tough one for Heffernan who faced a couple of the rankest bulls in the pen, but he gets a chance to get his name on the scoreboard here. Scooby Doo has now bucked off five straight riders to begin his PBR Australia career, but all riders who have faced him have gotten a start. I don't think it will be much longer until they figure this bull out. He will turn back into the Singleton cowboy's right riding hand as the gate swings open.

Lachlan Richardson on Trust Issues (Kleier Bucking Bulls)
Trust Issues had turned back to the right in his first two PBR Australia trips, but last night he surprised us by making a turn to the left. This is another bull that most cowboys get a start on, but as the rider progresses, he gains the upper hand as he ups the tempo. Richardson will need to be on his toes for this matchup.

Ty Thomson on POA Lock n Load (Dittmann Bucking Bulls)
Thomson rode very well last night but fell just short of the bell in both of his attempts. Here he gets a chance at riding POA Lock n Load, who is building a streak of buck offs. The bull has been covered a few times since the competition restart back in October for scores in the mid-to-high 80-point range. He will turn back into the Mount Walker young gun's hand, but he may put in a fake to the left before turning back to the right.

Kelsey Pavlou on Cattle King King's Ransom (Dittmann Bucking Bulls)
The Toora cowboy was another rider that wasn't far away from posting a qualified ride or two on the first night of the Grand Finals. Cattle King King's Ransom has been ridden just once from four trips so far this season. His regular trip is to enter an anti-clockwise spin, and he likes to get off the ground. That will put him into Pavlou's hand, and I think that there is a good chance that the pair will combine for a solid score.

Aaron Kleier on Forever Amen (Brandenburg Bucking Bulls)
Forever Amen has been ridden just once from his six trips in PBR Australia competition, and that was for a mid-80-point score. This bull likes to hurry from the chutes as the gate cracks and then turns back to the right. That means Kleier will need to get him done away from his hand, but I think he should be able to handle him for 8-seconds.

Brendan Buckholz on Super Natural (Wallace Bucking Bulls)
Buckholz wasn't far away from posting a score in the first round last night, but he ran into a smart one in the second session which had him down fast. He gets an excellent chance to bounce back here against Super Natural. This bull is a rider favourite because he always turns in an honest trip at a solid tempo. This is the first time that these two have met up in PBR Australia competition, but I would think that the Bundaberg bull rider would be very familiar with this bull.

Kurt Shephard on Ariat's Ol Son (Dunne Bulls)
This looks a tricky matchup for Shephard, and it may well decide his fate in the aggregate. Ol' Son has been posting outstanding bull scores in his rookie season, and he likes to mix up his trips. We have seen him turn back to the right, or look right before turning back to the left.