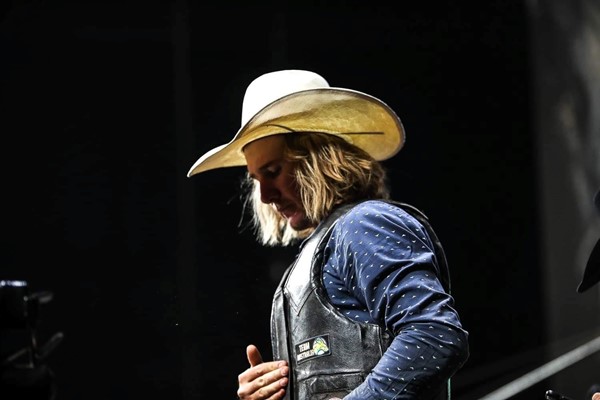 History repeated itself on Saturday at the 2019 Adelaide Invitational as Aaron Kleier went 3-for-3 to claim his second successive PBR Australia Monster Energy Tour win in the City of Churches.

After being the only rider to finish the 2018 edition of the event to cover all three of his bulls, the Clermont bull rider once again went perfect, finishing with an aggregate total of 242.25 points to claim his sixth event win of the 2019 season.

With Championship contenders No. 2 Brady Fielder and No. 4 Cliff Richardson both competing overseas at the 2019 PBR World Finals, Kleier took full advantage earning 505 points to extend his lead out to over 1500 points.

The title race is now down to just two Kleier and Fielder with 2500 points available next weekend at the PBR Australia Grand Finals.

The 20-year-old began his night with a 78.5-point ride aboard Reverend Mr Black (John Gill & Sons). Kleier then made the most of a re-ride opportunity, dominating Gold Bandit (John Gill & Sons) for 83.25 points to finish the two long rounds in fourth place.

Kleier made no mistakes aboard his Championship Round draw, combining with Silver Lining (Throsby & Russell Bucking Bulls) for 80.5 points. As the remaining riders bucked-off, his odds of going back to back and becoming the 2019 PBR Australian National Champion shortened dramatically.

Troy Wilkinson put together his best finish in recent months with a 2-for-3, 170.25-point night which featured both the Round 1 and Round 2 wins in the Adelaide dirt.

The Upper Horton cowboy rode Hit Man (Woodall Rodeo Company) for 84.5 points to get his night started right, and the 28-year-old followed that up with 85.75 points aboard Broken Halo (Throsby & Russell Bucking Bulls) in the second round.

Wilkinson earned 420 championship points for his second placing which catapulted him into eighth place in the National Standings, a position he last occupied in June.

Mellers picked up 310 points to consolidate his sixth place in the standings.

Splitting fourth and fifth place were Mitch Paton and Bailey Woodard on 166-points.

In his return from injury, Paton posted dual 83-point rides with the first coming in Round 2 aboard Street Kid (Woodall Rodeo Company). The Nebo cowboy was successful in the Championship Round aboard Hangover (Throsby & Russell Bucking Bulls) to jump from seventh in the order.

The 29-year-old now holds down the tenth spot in the National Standings after he earned 215 points.

Woodard's aggregate total consisted of an opening-round 84.25-point ride aboard YTB (Woodall Rodeo Company) and an 81.25-point effort aboard Coors Light (John Gill & Sons) in Round 2.

It was the 20-year-old's best finish of the season, and he climbed into contention for a Grand Finals alternate spot after he picked up 150 points.

No. 3 ranked Lachlan Richardson was the best of the riders to finish with one score on the board after he continued the rider’s domination of Matt Black (Throsby & Russell Bucking Bulls) for 85 points.

The 105 points earned would not be enough to keep the Gresford bull rider in contention for the Gold Buckle after he slipped outside the 2500-point barrier.

Also finishing with scores on the board were Ethan Watts with 83.75 points, Jay Borghero with 81.5 points and Robert Hicks with 79.5 points. Fraser Babbington closed out the Top-10 with 78.5 points, and Sam Woodall was the last rider to put up a score with 70.5 points.

The riders produced an above-average riding percentage for the third straight event, covering 34.69% of the stock while the bulls were 0.6 points down from their yearly average of 41.43 points.

Next stop for the cowboys will be the 2019 PBR Australia Grand Finals in Townsville this coming Friday and Saturday night.