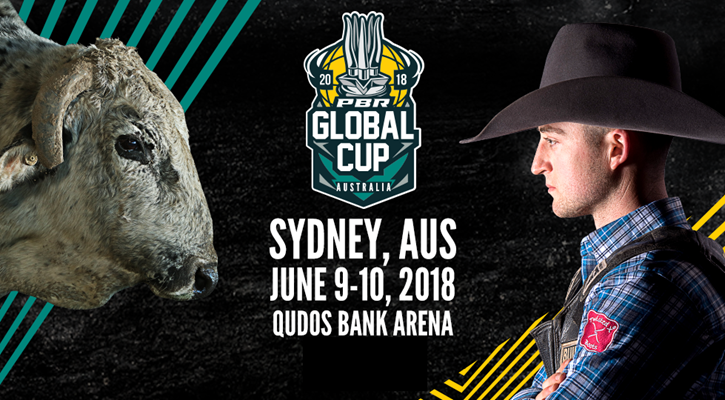 PUEBLO, Colo. – Professional Bull Riders (PBR) has announced that the PBR Global Cup will travel to Qudos Bank Arena in Sydney, Australia on June 9-10, 2018 for the second leg of the inaugural PBR Global Cup, a five-nation competition among the best bulls and bull riders in the world.

As PBR grows in popularity in the five countries in which the sport currently competes, the new global tournament features top athletes from Australia, Brazil, Canada, Mexico and the United States riding for their respective nation teams and an Australian-record $750,000 purse.

Prior to visiting Australia, the PBR Global Cup will debut at Rogers Place in Edmonton on November 9-11, 2017. Additional dates in Brazil, Mexico and the United States will be announced in the future.

Tickets for the PBR Global Cup in Sydney will go on sale October 27.

“Qudos Bank Arena is a world-class facility that has hosted the PBR Australia World Finals since 2010,” said Glen Young, General Manager for PBR Australia. “It is fitting that a competition crowning the world’s best bull-riding nation will be held in Australia’s largest city in a premier venue that’s been home to the Olympic Games.”

Situated in Sydney Olympic Park, Qudos Bank Arena, formerly known as the Sydney Super Dome, was completed in 1999 as part of the facilities for the 2000 Summer Olympics. The arena is consistently ranked as one of the world’s top sport’s facilities.

PBR is finalizing primary broadcast partnerships to televise the Global Cup in each country. Additionally, the events will be distributed to more than 450 million homes in 45 territories through PBR’s existing international broadcast partners outside of its operating territories.

Additionally, PBR revealed the Global Cup jerseys the bull riders will be competing in. High-resolution image and individual country jersey images are available upon request.

About the PBR (Professional Bull Riders)
The world’s premier bull riding organization began as a dream of 20 bull riders 24 years ago and is now a global sports phenomenon. On its elite Built Ford Tough Series (BFTS), the PBR features the Top 35 bull riders in the world and the top bulls in the business. The televised PBR BFTS, the PBR Real Time Pain Relief Velocity Tour (RVT), the PBR Touring Pro Division (TPD) and the PBR’s international circuits in Australia, Brazil, Canada and Mexico have paid more than $170 million in earnings to its athletes. Thirty bull riders have earned more than $1 million, including two-time PBR World Champion J.B. Mauney who has become the top-earning athlete in Western sports history with more than $7 million in career earnings. In May 2015, PBR was acquired by WME | IMG, a global leader in entertainment, sports and fashion. For more information on the PBR, go to PBR.com, or follow on Facebook at Facebook.com/PBR, Twitter at Twitter.com/PBR, and YouTube at YouTube.com/PBR.