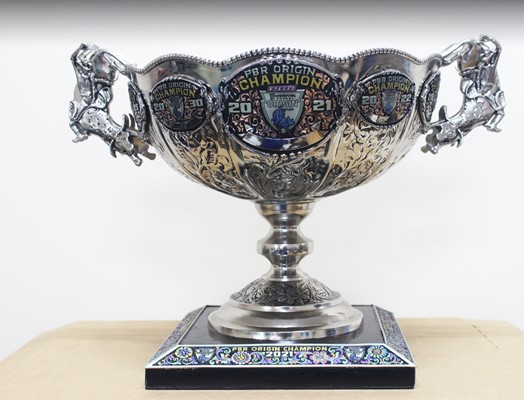 No matter the sport, athletes across all disciplines share a common goal –  winning and claiming the accompanying trophy or prize that is awarded alongside the title of champion. And over the years, those symbols of greatness, including the Vince Lombardi Trophy, Olympic Gold Medal and Stanley Cup, have become part of the everyday lexicon, synonymous with excellence.

While in western sports that prize is often a buckle, including golden one awarded annually to the PBR World Champion, for the 2021 PBR Origin tournament the winner will be presented the sparkling trophy crafted by Bob Berg Designs.

“Our main objective was to get a trophy that was unique to our sport,” PBR Australia General Manager Glen Young said.

Originally crafted in 2020, more than 100 hours were put into the design and craftsmanship of the glittering trophy.

Weighing approximately 10 kilograms, the PBR Origin trophy is made of a granite base, and features bronze casting, chrome and rose gold plating, and a titanium overlay.

While the trophy’s handles are aptly shaped like bucking bulls, the cup of the trophy is adorned with several buckles to honor the past, current and future champions of the PBR Origin tournament.

“It was originally built last year, however the 2020 award on the trophy will go unclaimed for eternity,” Young added. “It will be a great reminder to teams of the challenges the world faced that year and had to overcome in order for the competition to return in 2021.”

The event will feature three rounds of competition. After each of the 10 competing bull riders for both teams attempt one bull each in Round 1 and Round 2, the Top 4 riders from each team will advance to the bonus round for one final out. The event winner will be the team with the highest combined score in the event aggregate.

In addition to vying the title of PBR Australia Origin Champion and their share of the event purse, riders will also be competing for points towards the Australian national standings and broader PBR World Standings.

“Origin is a competition that brings both athlete and fan together,” Young concluded. “It’s one of the biggest rivalries in this country, no matter the sport, and it is always seen as the pinnacle of competition.”